If you chat it up with any classic muscle car collector, aficionado, enthusiast and you mention the 1969 Dodge Coronet RT you will be met with smiles and raised eyebrows and a conversation that should not only take you the better part of the day but make yourself a friend or two!

The 1969 Dodge Coronet RT is remembered not only for it's unique looks and style but for it's performance and engineering history. There's no mistaking one of these muscle cars for another model even though it had several cousins in the line of muscle cars from Chrysler/Dodge.

With the 440 cubic inch Six Pack, the 390, 426, and 440 horsepower engines also had an accompanying 426 Hemi V8. It had the single four barrel carburetor. It had the A833 four speed manual transmissions 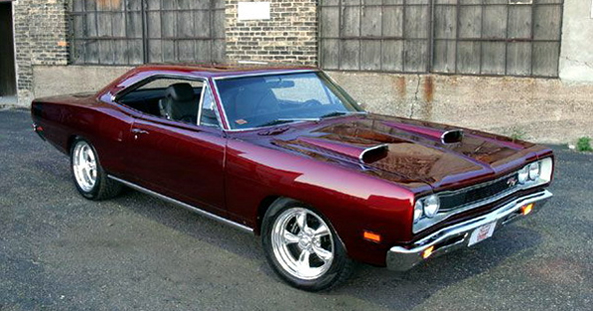 What many 1969 Dodge Coronet RT fans will discuss are the changes in the design features that have now become signature in relationship to this classic muscle car and it's siblings and rivals. The carryover hood had the stamped metal skirt. A new grill that featured stamped aluminum in horizontal configuration that went in tow with the air cooling features for the engine. There are the scoops that cooled the carburetor and also a signature feature. If you find the convertible version of the 1969 Dodge Coronet RT you're in the catbird seat for sure. Even with todays high tech cars, the Coronet RT would still stand out and make you look good and be the center of attention. It's just that kind of classic muscle car design that still grabs the looks and admiration.

Since this car was popular on both the streets and drag strips you'll find lots of history all over from people who've not only owned these cars but also done maintenance. Add to that the history of the engineers and designers and you'll be up to your fenders in muscle car history.

The 1969 Dodge Coronet RT had the quad headlights with the full wide panel of tai lights. It had bucket seats and other modifications that cusomizers adored. You'll need to look carefully at one of these rare cars when you see one on the streets or at the shows. You'll see a range from the standard issued to the elaborately customized.

It goes without mention that finding one of these beauties intact is an adventure unto itself but should you do, be ready to shell out a small fortune. They're still in demand mainly because of the nostalgic value and conversation value. People who owned them remember them fondly and you'll find on occasion original owners parading about in this car with their heads up and smiling from ear to ear. The 1969 Dodge Coronet RT sure brings back the memories and will make new ones for the new collectors out there.

Get the latest on classics & muscle cars for sale, reviews and photo galleries

You have Successfully subscribed. Please check your email to confirm your subscription.

Your e-mail address will NEVER be shared with third parties.